Allegretto: "This is all so frustrating. More than anything, I don't want to let you die. But what the heck can I do? If I knew, I would do it."
Polka: "I'm so sorry."
Allegretto: "What for?"
Polka: "Well, I... I had no idea you'd been worrying about me this much. But, for some reason, knowing that, actually makes me feel kind of happy."
— Allegretto worries over Polka's fate.

Allegretto (アレグレット, Areguretto?) is one of the main protagonists from Eternal Sonata. Allegretto is a young thief from the harbor city of Ritardando, and is often looked up to by the younger orphans as a hero. Allegretto and his friend Beat join Polka's journey to Forte in an attempt to lower taxes on items other than mineral powder.

Allegretto: "You know what they say, 'If you don't go into the lion's den, you can't count your chickens.' (sound of wind blowing)"
Viola: "That doesn't make any sense."
— Allegretto bravely leads the party onward.

Allegretto is a sixteen-year-old boy with silver hair and dark blue eyes. His outfit consists of a blue vest over a white long-sleeve shirt with a stylized pauldron on his right shoulder. He wears short olive green pants and large brown boots with an intricate design. In the PlayStation 3 version he has an alternate costume, which can be found in To Coda Ruins if the player follows the path of teleporters.

Allegretto is protective of Beat and the others. He has a crush on Polka and cares deeply for her. He has a strong will and is confident, and values Polka's respect greatly and tries to hide some of mischievous nature and less admirable qualities from her, for example, claiming to run a store in Ritardando and not revealing the truth regarding his not helping the party with clearing out the "ghosts" underneath the Mandolin Church. He has a soft side and shows this mostly to Beat, but during the journey he opens up to the rest of his companions. Allegretto is not fond of large groups since he often complains about the constantly expanding team. He eventually gets used to the new additions and learns to accept them, becoming a sort of natural leader.

At times, Allegretto can be brash or teasing, making fun of Beat for his photography and openly stating he doesn't believe Frederic's claim that the entire world is his dream. At other times he can display a surprising depth of emotion when not trying to hide it.

Allegretto seems to fall for Polka from the minute he sees her, acting nervous around her, though also somewhat doting. When he first meets her he tries to hide the truth from her about his activities, claiming to run a small shop in Ritardando along with Beat. His shyness towards Polka makes him an easy target for light-hearted teasing from Viola.

"Bloody Plume! Cry me a river.. You wimp!"
—Allegretto during his Bloody Plume Special Attack.

His weapon is a one-handed sword. Allegretto can equip light and heavy armor, maximizing sufficient defense for melee combat. He has multi-hitting attacks like Sun Slash and Shadow Assault, which can be used to deal high damage to an enemy. He can also attack from afar with Phantom Wave and Fire Wave, and has great knockdown capabilities with Sky Divider and Void Edge. Starlight Blast and Bloody Plume are his most devastating attacks, both true displays of his sword prowess. He is one of the best fighters in the game and continues to topple enemies effectively as he levels up. Allegretto fits the role of a well-balanced protagonist and has no major flaws. He is one of only a few characters in the game with a weapon that places him in permanent Burst status, the Hellstriker, and gains it earlier than other characters. Additionally, some of his weapons carry a chance of placing opponents in Poison status. In Encore Mode, his Silver Star becomes available in Chapter 7, a true powerhouse weapon that increases his active time when his regular attacks hit and allows him to always deal critical damage no matter what angle he attacks enemies from. This weapon is best utilized with either the Crimson Brooch or the Solomon's Ring (in the PlayStation 3 version) to keep him in Burst status for phenomenal attack power.

Allegretto is first seen in the beginning of the game when he and Beat are robbing bread from the local bakery in Ritardando. After he and Beat steal the bread they deliver it to the orphans in the sewer. Later at night the two discuss Polka and her illness, then decide to head out to Forte to speak with Count Waltz. The next day they set out to Forte and wind up in Agogo Village and meet March, Polka, and Frédéric. Polka runs away and gets attacked by a monster, but Allegretto and the others defeat it. In March's Inn the group decides to adventure to Forte together since all four have a business in the city.

Allegretto ends up with Viola, Jazz, Claves, and Falsetto who decide to make for the secret rebel city of Andante. They travel through Adagio Swamp for four days, staying at the Cantabile Inn for a night. Allegretto tales a walk outside and thinks about what happened at Forte Castle. Jazz and Viola arrive and speak with him. Allegretto figures out that Tuba attacked him and his friends because he thought they were with Andantino, and tells Jazz there is a spy is in the resistance group. Allegretto and the others head out the next morning and pass through the poisonous Woodblock Groves. After defeating the monstrous swamp guardian, the group arrives at the Andante. Jazz and Claves leave, telling the rest of the group to spend time in the city. They encounter a young boy who is dared to retrieve water from a sacred spring in Lento Graveyard. Allegretto, Falsetto, and Viola go in the boy's stead and defeat the monster guarding the graves. Allegretto and the others return into the city and intend to meet Jazz, only to discover Claves was murdered. The group splits, all of the members choosing their own path; Allegretto decides to return to Ritardando and look for Beat.

Beat and Frédéric arrive at Allegretto's house some time later and Allegretto informs the two of what happened in their absence. Allegretto gives Frédéric a tour of Ritardando and while out they see the church packed with people concerned that ghosts are haunting the building, and are ordered to investigate it. While inside the church Allegretto and the others meet March, Salsa, and Viola. Allegretto pretends to fear ghosts and tricks his way out of the job, deciding to head out to Tenuto and pick up Polka. On the beach he finds an odd-shaped rock and decides to keep it. Allegretto arrives in Tenuto late at night and meets Polka's mother who tells him of Polka's astra. He goes to the flower fields and meets Polka, and the two talk and expand on their relationship. Allegretto is concerned of her fate and wants to help cure her. Polka throws her good-luck-charm off the cliff into the ocean and Allegretto gives her the rock he found on the beach, shocking Polka, as it turns out to be the same good-luck-charm rock she'd just thrown away.

Legato tears open a hole in time and space and the party follows them into the Elegy of the Moon Distortion. At top of the Double Reed Tower of Sand, Allegretto and the others fight Count Waltz and Legato. After defeating the two, Waltz commands Legato to destroy the world and Allegretto and the others are sent to a corrupt version of the Tenuto flower fields where they are forced to fight Frédéric who wants to end his life. After defeating his friend, Allegretto regrets there was no other choice. Polka jumps off a cliff and seemingly commits suicide, thinking she is the only one who can save their world. Allegretto cries out Polka's name and bursts into tears, asking if this was the only thing Polka could have done. He turns to Frederic, demanding that he do something if the world is really his dream. Getting no response, he declares it is no dream, it's real, and he doesn't know what, but he has to do something. Frederic arises and suggests that what Allegretto is saying is true, and perhaps the world is no longer a dream. After Polka is reborn and brought back to the cliff by the glowing agogos, the world is restored. Allegretto and Polka embrace and have their first kiss.

This is complete list of Allegretto's Special Attacks. Some of Allegretto's moves were altered in the PlayStation 3 port, so he learns some abilities at different levels. 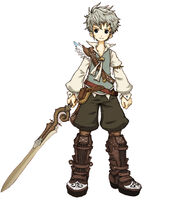 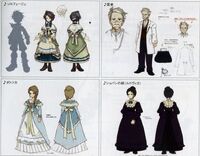 Allegretto doing a Level Up Pose 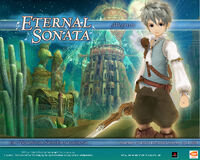 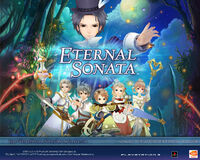 PS3 promotional wallpaper with other characters 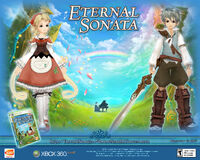 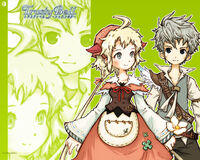 In music, "Allegretto" is a tempo marking that indicates that the music should be played moderately fast, but less so than the fast, quick and bright pace of allegro.[1]

The Eternal Sonata Wiki has 139 images related to Allegretto.

The Eternal Sonata Wiki has a collection of quotes by Allegretto.

Community content is available under CC-BY-SA unless otherwise noted.
Advertisement